The one to one interview is a widely used means of generating data in qualitative research. It is a chance for a researcher to spend time exploring a participant’s experiences, practices, perceptions, stories, in detail.

I’d like you to imagine what this might look like. Perhaps you’ve done some interviewing yourself. Perhaps you are planning to do so. What will the set-up be? Here are some images I got from google that capture the sorts of practices I’m referring to. 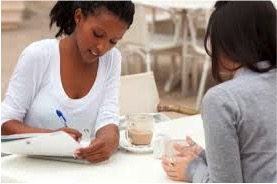 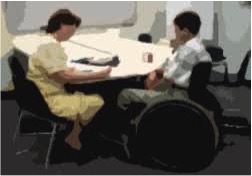 The point here is the interview is constructed and conducted as a dialogue – a to and fro between two people. Generally one person (the researcher) is asking questions about the other (the participant). It is a dyadic interaction.

My argument is that interviews are better conceived and done as triadic interactions: between the researcher, the participant, and something else.

Before I go further I need to lay out two assumptions:

So the X on the diagram above is there to show that data come from interaction between you, the interviewee and a third thing.

This third thing, when used in particular ways, has amazing magical powers.

What am I talking about? What is this third thing?

The third thing can be an object or idea (ie concrete or abstract), but to have these magical powers it has to change the structure and function of the interaction.

If we wanted to know what a teacher thinks about, say, teaching in schools, we could ask “What do you think about ensuring accessibility for all learners?”. The question is aimed at the person, directly.

Instead, we could show a photograph of a classroom, or a video, or have one of the teacher’s lesson plans or some examples of resources she has used in her lessons. Then we could ask the interviewee to comment on those things. The interviewee can look at them, perhaps even pick them up.

We have changed from a question that follows a path directly from the researcher to the interviewee and back, to one that goes via a third thing.

Other examples could be diaries, concept maps, small cards with different words or pictures on them, computers or tablet devices, other relevant documents, artefacts people have produced or used – the list is pretty much endless. The magic is not in the thing itself, but in how it is used.

As I mentioned, some of these third things might not be concrete, tangible objects. They could be ideas that are invoked through the way the question is put together. Let me explain with an example.

I’ve been interviewing a lot of parents recently, people who have been experiencing significant difficulties, often for reasons beyond their control. When I was piloting, I found that the question “What do you think your strengths are as a parent?” didn’t produce very good answers. Duh. Why would it? These were vulnerable people who were often self-judging as failing.

Instead I starting asking questions like these: “If I asked your partner what he thinks your strengths are as parent, what would he say?” or “If I asked someone who knows what you’ve been through and knows you really well, what would she say has enabled you to get through it all?”. These questions still take an indirect route (ie via the top of the triangle on the diagram above), but this time the third thing is invoked in an imaginary way.

Why is this indirect, triadic way so valuable?

I’m not claiming these ideas are particularly new. People use them all the time. But I haven’t read much about them in the textbooks, at least not explicitly framed this way.

Finally, here are some brief comments from Sally Irvine-Smith, a wonderful doctoral student here at UTS. She has been working with interviews on these principles and kindly offered to share some of her experiences. Thanks Sally!

I am adopting a practice approach which focuses very strongly on what people ‘do’. My study which is about decision makers in the local sphere. One group of participants were involved in a community panel to decide how to spend a certain amount of money for a local council. They were given a large folder of documentation and I asked them to bring that along to the interview where we jointly examined it. Interestingly, although they all (but one) had quite an affection for the folder as a memento of their time on the panel, it was not particularly important to them as a source of information. The remainder of my participants were elected members  or council officers. I did something a little different in their case: I asked them to think of a decision they were making and I treated that decision as the object in the interview. I encouraged the participants to examine their decision as if it had material form, to discuss its genesis and outcome, to describe who helped to shape it, and how it transformed and developed over time. I haven’t written up any of my results yet, but my data analysis indicates that the results from this technique are rich and provide an authentic picture of what my participants actually do when getting information for their decisions.

10 thoughts on “Enhancing 1:1 research interviews: the secret power of the third thing”

Please join in and leave a reply! Cancel reply

Creative Commons License Nick Hopwood is licensed under a Creative Commons Attribution-NonCommercial-ShareAlike 3.0 Unported License. Permissions beyond the scope of this license may be available at Nick.Hopwood@uts.edu.au See https://creativecommons.org/licenses/by-nc-sa/3.0/au/